Laguna Beach Broker Preview takes place on Wednesdays when agents put their listings on display for other agents to visit. It’s always a fun and interesting activity due to the insane variety of homes found in Laguna Beach. Being the weirdo I am, I get a kick out of funky, unconventional and curious elements some homeowners incorporate into their homes.

Today, in Laguna Canyon – the nave of individuality in Laguna Beach – I visited a small (okay, let’s be honest, it was tiny) property. It had been the home of a family with three boys. Nooks and crannies were cut into the walls in bizarre places to create little “lofts” just large enough (barely!) to fit a single mattress. Apparently the fellas would crawl into these pup-tent size spaces for their sleeping quarters, as there was only one bedroom. Ah, necessity is the mother of creativity.

Well, it turns out the boys, as they got older, were quite industrious lads. Laguna Canyon, for those not familiar, has some steep, rocky walls, which is exactly what bordered the back of this home. Not to be deterred by the imposing terrain, the boys were determined to create a deck overlooking the property. I mean, who could blame them for wanting to get out of those cocoons they slept in? The only problem was that it was almost straight up. And it was rock. Apparently, they were not only industrious, but clever, as well. They ended up building a vertical, serpentine series of slate-covered steps up the hillside to a landing above the house. Three or four stories up! No kidding.

Lacking a normal person’s allocation of survival instincts, I accepted the challenge to scale the steps to the top. In awe of the effort to create this ladder, er…staircase, I had to chuckle at the three chairs (one for each boy?) set out to take in the view. My hat’s off to you, guys. Job well done! 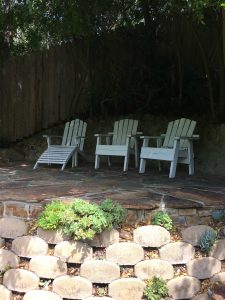