TAKING PART IN LAGUNA BEACH’S PAGEANT OF THE MASTERS

Being the dedicated reader of StuNews Laguna that I am, I saw a notice that the Pageant of the Masters would be holding a casting call. My eleven-year-old son loves his drama class, so I had the hair-brained idea that applying for a role in the 2017 show would be a fun father-son experience. Off we went on a Saturday morning to fill out our applications and run through the gamut of measurements and picture-taking that each applicant is subjected to. My wife kept reminding me how this is a huge commitment, that the show runs all summer long, that there is a performance every night, that there is no way she is going to be responsible for getting my son to the performances. “This is all on you” she clearly articulated.

For those who don’t know, the Pageant of the Masters has been running for 84 consecutive years. It takes place in an outdoor amphitheater, the Irvine Bowl, with intricate sets, live narration, a professional orchestra and magical lighting (it has to be magic, there’s no other explanation). Arguably one of the most unique productions in the world, local artists recreate famous paintings by “masters” using real people to pose as the characters in the painting. The resulting stage, with live performers maintaining their poses, looks impossibly like the original painting. If you haven’t ever been, it’s a must-see, mind-blowing production. You can learn more here: https://www.foapom.com/pageant-of-the-masters/.

Anyway, back to my serious lapse in judgment, we let the organizers know that this was really about my son and that I was just along to be his transportation. A few weeks later, I got a call that I (“Not my son?”) was being selected for a role in the production (the painting is “A Group of Danish Artists in Rome” by Constantin Hansen) and would I please come in for my rehearsal and fitting. At the fitting, I reminded the organizers that I was really doing this for my son and needed him to be in the show with me. “Don’t worry” they reassured me, “We make families a priority.”

Over a casual dinner with friends, answering the question “So what’s new with you?” I mentioned that I was going to be participating in the Pageant this year, assuming my son gets a role, as well. I showed them a picture of the person I was going to represent. They said (okay, the wife said) “Too bad you won’t be the naked guy on a bronze stallion. I’d come to see that!” Ha ha ha. Pity you won’t be having all your fun at my expense.

Fast forward to this past Monday when I received another call from the casting director. Assuming this was to inform me that my son had been selected for a role, you can imagine my surprise when she asked if I would be willing to take on a second role in the show. Coyly, she added “It requires you to be shirtless.” Huh? Does it involve a bronze horse? “No, you will be a bare-chested Native American.”

So here I am, doubled down with a commitment to take on two roles, no role (so far) for my son, a wife who thinks I’ve lost what little common sense I previously had, and a gleeful friend giddy over the fact that I’ll be half naked on stage.

I hope you enjoy the show. You’ll recognize me as the one sleeping in the dog house…

Update: The following picture is with me and my fellow Danish Artists in our first dress rehearsal. 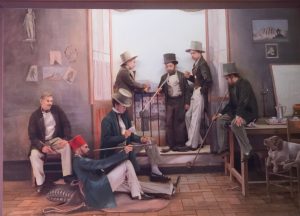